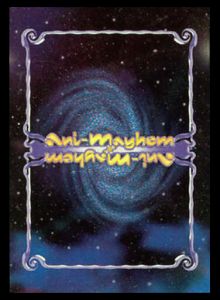 Ani-Mayhem is an anime-based CCG first released in 1996 in the wake of the CCG boom created by the popularity of Magic: the Gathering. Produced by the merchandising arm of Pioneer Animation (now known as Geneon) and published by Upper Deck, Ani-Mayhem's cards featured images from a variety of anime series and movies.

The idea of the game was to allow an open-ended system that would allow all characters from all anime to interact with one another in the same card game. The result of the game was a very pretty set of cards, but very badly managed game terminology. If you were to print out all the card errata there was, it would be at least three-to-four times as long as the game's rulebook. Another problem that hurt the game came in the wake of the Dragon Ball Z expansion. The cards in this set were typically much more powerful than the average cards present in Sets 0 and 1, leading to serious imbalance that was further compounded by the vast number of rules changes that the expansion introduced.

Ani-Mayhem is designed by Jon Healy, Keith Pinster and Josh Ritter for 1-4 players. The Locations have green backs, the Combat cards have a red back and all other cards have a blue back. Ani-Mayhem is the first CCG that used images from multiple "universes".

Below is a complete database of the Ani-Mayhem CCG. Click on one of the sets below to view the cards in that set. Click on a card to add it for sale, trade or a wishlist / collection. If you find any errors in the database, please contact us using the feedback form at the bottom of the page.