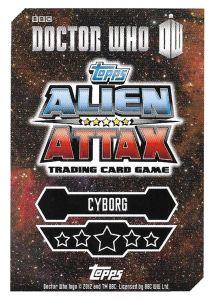 The Doctor Who TV show reached its 50th anniversary in 2013. The European division of Topps released a collectible trading card game in honor of this, with both a first edition earlier in the year and a 50th Anniversary edition later in the year. It was primarily sold in the UK.

Alien Attax is a simple card game for two players. Each player lays 9 cards face-down. Decide who goes first by flipping a coin. The first player picks their first card and decides whether to attack or defend with it, while it is still face-down. The second player chooses which of their cards to respond with, again while it is still face-down. Then both cards are revealed, and their attack/defence numbers are compared to determine who wins that round. For the next round, the opposite player gets to make the first choice. After all 9 rounds have been played, the person who won the most rounds wins the game.

The first-edition Alien Attax series had 240+ different cards available, and the 50th Anniversary series had an additional 160+ different cards. The 50th Anniversary cards have a grey Tardis '50' symbol in the top right corner of the fronts of the cards. Starter packs were available that included a "Collector Binder", "Collector Guide" with checklist and how to play, and a two-sided paper play mat, in addition to cards. A Collector Tin was also offered with a bundle of cards.

Below is a complete database of the Alien Attax CCG. Click on one of the sets below to view the cards in that set. Click on a card to add it for sale, trade or a wishlist / collection. If you find any errors in the database, please contact us using the feedback form at the bottom of the page.