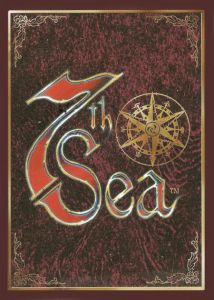 7th Sea is a collectible card game published by the Alderac Entertainment Group from 1998 to 2003. It features a pirate-like environment and it was designed by Dan Verssen, Dave Williams (II) and Erik Yaple.

In the 7th Sea CCG, players take the role of naval captains in the fantasy-Restoration world of Théah. The game attempted to capture the feeling of a Hollywood pirate battle, complete with huge galleys, cannon-shot exchanges, and daring sea boardings. The game also has aspects of adventuring, treasure seeking, and the occult.

As with most of the games of AEG, 7th Sea had a complex storyline that affected and was influenced by the RPG setting. The results of tournaments would function to guide the storyline, and the storyline in turn would be used to create new cards.

Below is a complete database of the 7th Sea CCG. Click on one of the sets below to view the cards in that set. Click on a card to add it for sale, trade or a wishlist / collection. If you find any errors in the database, please contact us using the feedback form at the bottom of the page.